“Benefit of the Doubt”-the act of assuming that a person deserves our trust. So, we assume good intent on their part by accepting them as having honest intention.

A few months ago, I enrolled in an online local networking program. A national version was offered shortly after, and I quickly signed up. It was a really valuable experience. The chance to meet other business owners from a variety of industries made for a rich experience.

One member and I agreed to connect after the program. We did, and we both agreed it was a good experience, hence, let’s connect again. In between, there were a few things we both agreed to and that we would follow-up with each other prior to the next virtual meeting.

I did my part and as we agreed, reached out to my colleague. Silence. I made several more contacts via email, silence. I turned to the various social media, silence.

Eventually, I picked up the phone and called. My colleague answered. I shared the silence that the many attempts to contact (them) were met with. Turns out a perfect storm had hit in both (their)work and personal lives. Some significant issues had ensued, and (they) had no capacity to remain online or at work. (They) thanked me profusely for giving (them) the benefit of the doubt as indicated by the many attempts in the many different medium, to connect with (them).

…”without the cardinal rule of attentive and intentive listening, we cannot begin to understand the shared experiences and gifts, those who identify as white…BIPOCs and LGBTQ2S+ communities, each has to offer  one another…”

Giving employees the benefit of the doubt is a real issue and the lack of which impacts employees’ overall sense of psychosocial health and safety. It’s an issue leaders face more now that workplaces have become increasingly diverse and dispersed.

I admit, some bias and prejudicial thoughts floated up in me regarding this colleague. Yet, I recalled many times over my career when I could have used the benefit of the doubt.What a difference that would have made for my career!

I recalled pleading with one boss of mine in an attempt to explain an incident that had transpired. Though it was the first incident in the years I was an employee, it all fell on deaf ears. I left that organization feeling unheard, uncared for and above all, that I didn’t matter.

The most important function of a leader is to influence those who have been placed in their charge. How do you check your level of influence? How do you know the influence you exert is exactly what you want to see demonstrated by those in your charge? Practice PAUSE:
P-see the PERSON behind the issue. Wear that PERSON’s shoes for a moment or two. Get to know them from their side of the story.

A-Ask open-ended and genuinely curious questions. Refrain from asking confirmation questions these only feed your bias. Ask questions that are designed to change your current perspective. If you still retain your original perspective after hearing out the person, and listening without judgement, them run with it.

U- UNDERSCORE your deep values in every interaction. Ultimately, how you manage each employee will underscore just how much you can be trusted to be fair, impartial, and good. These qualities reflect what you value. You will see them reflected back to you from your employees.

S-SEEK deep understanding of what transpired. There are so many factors at play that shape employees’ behaviours. Even the most seemingly sophisticated and bright employees may lack certain key abilities. I was such an employee and wished a few of my earlier bosses knew this.

E-EVALUATE before you decide. The wisdom teachers often encourage us to take time to cultivate our answers before we speak. The power of PAUSE allows you to do this and in so doing honour the humanity of those who have been placed in your charge.

…31% millennials and 35% Gen Zs said they’ve taken time of work due to stress and anxiety caused by the pandemic…approximately 40% of millennials and Gen Zs feel their employers have done a poor job of supporting their mental well-being during this (pandemic) period. 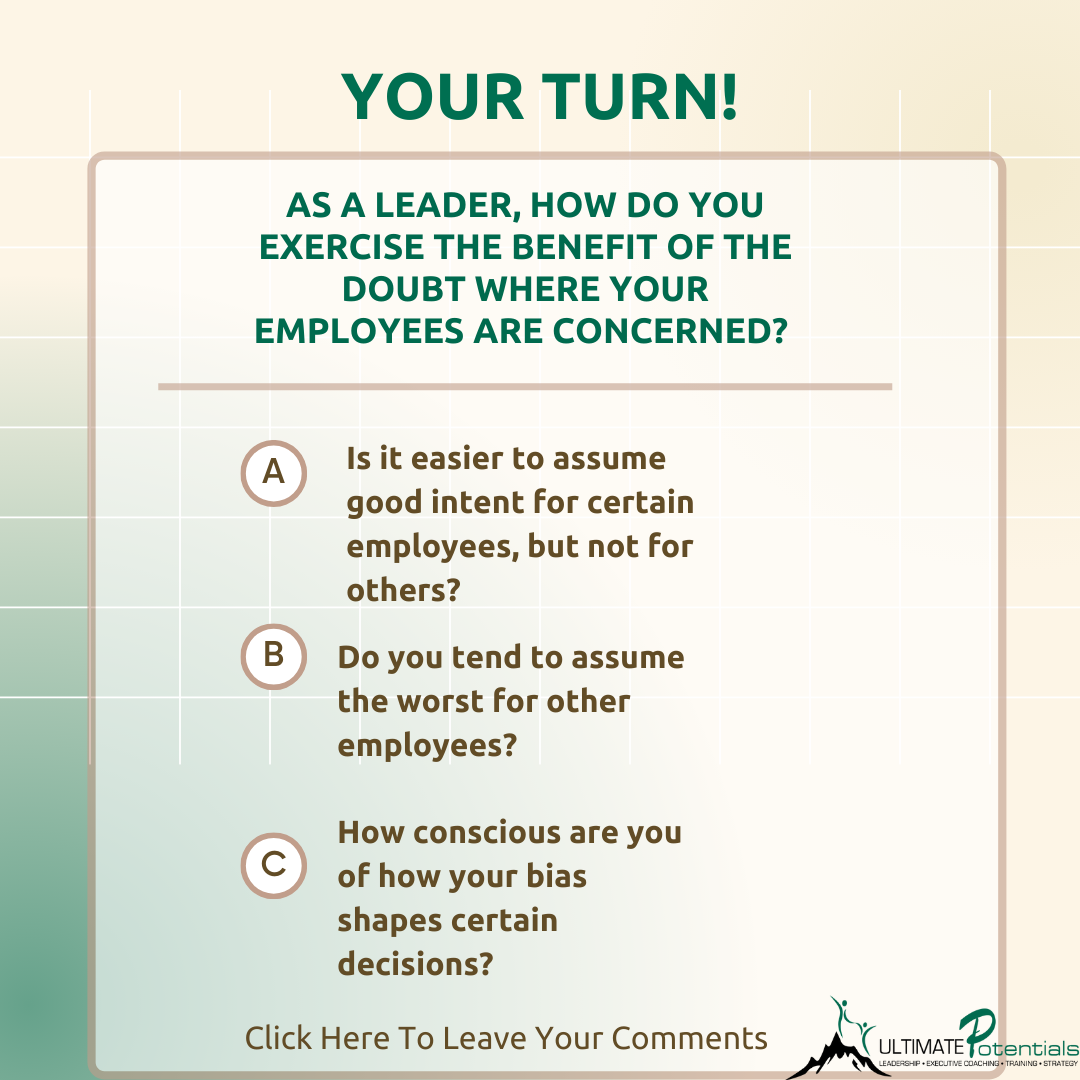 We want you to live and work to your ultimate potential!

When you subscribe to our Thrive! Community you receive perks such as discounts on courses, workshops, coaching sessions and more! Plus, your membership provides you with transformational articles on topics specifically sourced to meet your life and work needs.

Get in touch with us